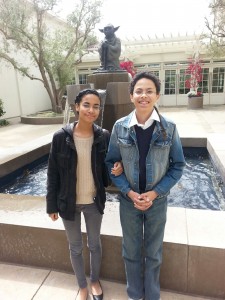 Me and my “little” brother outside ILM studios. A yoda fountain that is.

I went to watch dinosaurs eat people. I was not disappointed. Jurassic World (2015) features Chris Pratt as Owen Grady and Bryce Dallas Howard as Claire Dearing as leads. In this possible alternate timeline, Jurassic Park is now open to the public and wildly successful. But in a world where children have grown up knowing dinosaurs exist, the novelty of bringing back the once extinct as worn off. To keep things interesting, scientists have started crossbreeding and genetically engineering new dinosaurs. And this is where the trouble starts.

The dinosaurs are the clear stars of the movie, and I found myself more concerned about a baby triceratops almost being carried off by pterodactyls than the dozens of tourists being seriously maimed or killed in the same scene. In fact I couldn’t bring myself to care about any of the characters – with the exception of Chris Pratt of course because, well, he’s Chris Pratt. I didn’t dislike any characters and a few where actually quite funny. But they all seemed one dimensional, stereotypical, and could have been played by any number of actors. If you expect a deeply moving message or plot this is the wrong movie for you. But if you just want to see dinosaurs eat people like I did, you will have a fun time.