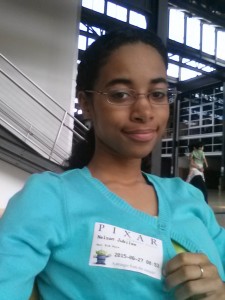 This past Saturday (June 27th) I had the pleasure of seeing a screening of Inside Out at Pixar Studios in Emeryville. Truthfully, I had heard little about the animated comedy aside from seeing snippets of the trailer. The plot was certainly original – something that can rarely be said of movies these days – following an eleven year old girl’s (Riley) characterized emotions (Joy, Sadness, Disgust, Fear, and Anger) as they try to comprehend how to deal with her family’s very sudden move from Minnesota to San Fransisco.

Despite points for originality, I found the movie predictable. At the end of the movie (Spoilers) we learn that it’s okay not to be happy all the time, and emotions are more complicated then we think and often intertwined. While these are certainly good lessons, I thought some moments were cliched. Joy and Sadness’s interactions felt noticeably scripted especially when there was the intent to be silly/quirky (“You’ll get lost in there.” “C’mon, think positive!” “Okay. I’m positive you’ll get lost in there.”). I felt that anyone who had to sit down and watch a children’s movie before could very easily predict several of the jokes and plot lines.

Still, the film’s strongest selling points were its humor (when not noticeably scripted), storytelling, and originality – as is often the case with Pixar films! The plot of the other three emotions trying to man command central and pilot Riley is entertaining, as are the glimpses into the parents’ emotions as they attempt to figure out their daughter. All in all, the movie is a heartwarming, silly piece full of feeling.